So I’ve been meaning to write this post for a while now… It’s been easier for me to share on social media then to sit down and write everything we experienced, but I’ve finally brought myself to a point where writing it out brings closure.

It’s been 7 weeks since Ezra went back for surgery and honestly I still can’t believe the surgery is behind us. I still wake up some days and have to remind myself that it’s over and he is okay. Actually he is amazing. God’s healing power in his life was astonishing, which I’m sort of ashamed to admit because I shouldn’t be surprised by his work after following Him for so many years. None the less, I am human and for some reason a part of my heart had so much fear the day I laid him on the operating table. I walked out looking back at him, with tears filling my eyes wondering if that was the last time I would hold him. Did I just lay him on his death bed? Leading up to surgery I would rock him to sleep, even when he was so tired he didn’t want to be rocked, I would hold him tight and pray that this wasn’t my count down to rocking him to bed every night. I know it sounds morbid and completely irrational but that’s just honestly were I was spiritually and emotionally.

We got to Boston on Superbowl Sunday, which I expected to be crazier since the Patriots were playing. The next day we had a series of pre-op appointments to go to and I had no idea what to expect. We made our final list of questions and brought them to the doctors. It was a long day at the hospital meeting with different people and discussing all the horrific things they were about to do to my son. The last step was getting Ezra’s pre-op blood work. Let’s just say, he screamed, I cried, and my anxiety tripled in that moment.

That night we rocked him one last time, prayed over him and tried to sleep. The next morning we had to wake up super early and get to the hospital as he was number one on the surgery schedule. I remember sitting in the family holding room waiting to be called back to be prepped for surgery and there was another family there also waiting. They were doing a pretty serious surgery for their 6 year old and would be hospitalized for months. I was grateful that wasn’t Ezra’s case but selfishly focused on my fear.

They called our name and the rest of the time was a blur. At one point there was easily 8-10 people standing around us introducing themselves “Hi, I’m… and I’ll be on your son’s anesthesiology team, please sign this release for me” or “Hi, I’m… and I’m a neurosurgery resident, I’ll be assisting in your son’s surgery.” It was overwhelming. They allowed for one of us to go back with Ezra and hold him while they sedated him. I wasn’t sure if I could handle this but when the time came to hand him over, there was NO way I was letting anyone else do it. So I suited up in scrubs and stood there waiting for them to walk us back. It was a tearful goodbye for Josh, we prayed one last time and I took the walk, carrying my son back.

I got into this huge operating room with all the tools laid out, the big lights shining down on the table and all those people we met running around prepping things. It was like I was standing in a Grey’s Anatomy episode but this time I was living it not watching it on TV. I sat down on a stool next to the table and they asked me several questions regarding Ezra’s birthday, diagnosis, etc. He was gripping me tightly, I think we were both overwhelmed by the amount of people standing there staring at us and all the big lights shining down. They placed a mask over his face and warned me that he may twitch as the medicine puts him to sleep, which he didn’t do thankfully. He immediately started crying and turning his head all around trying to escape the mask. They told me to sing to him and rock him. I started singing our favorite song…

“Jesus loves me, this I know, for the bible tells me so…”

The tears were streaming and at this point I could barely get the words out. Oh my heart. It was the hardest thing I’ve ever done. He passed out and they asked me to lay him on the table and give him a kiss. I laid him down, took the mask of my face kissed his sweet little face and let go. As I walked out the door, I turned around for one more look at him and prayed that wasn’t the last time I’d lay eyes on him. His lifeless body laid there on the table with nurses surrounding him and I had to just walk away.

I met back with Josh in the prep area and they walked us back to our family who had settled into a spot in the waiting room. It was about 7:30am at this point and we would have 90 minutes to wait until the first update. We got updates every 90 minutes. Around 11:30am I started getting more anxious. Other families around us were being told their child was out of surgery and I was still sitting there waiting. It had been 4 hours and I was done waiting. They said it could take up to 6 hours but I just couldn’t take another 2 hours sitting there. Just about the time I reached my threshold of patience the Neurosurgeon came out.  As he walked towards us I shot up like a rocket and glared at him with expectation, what was he about to tell me?

“He did amazing” That’s all I heard after that. He blabbed on about what they did and said something about the plastic surgeon finishing up but all I need was “he did amazing,” About 30 minutes later the plastic surgeon came out and explained to us all the room my son’s brain now had to grow, 1.5cm here and 2.5cm there. It was over. He made it through. The relief was unbelievable.

I quickly packed my stuff up and we went to the PICU where I could finally be reunited with my son. The lady at the front desk said the nurses were still cleaning him up and I had to wait. So I complied and sat down in the waiting room again. After about 15 minutes of waiting I gave up. I went back to the lady and told her I needed to go back and see my son now. She called the nurse and they said yes. I ran down the hall way and grabbed Josh. We took the long walk all the way to the end of the hallway to the very last room, as I turned the corner, I had no idea what I was about to see.

There he was laying on the bed, his little head wrapped up like a turban, his paci in his mouth and wires coming out every which direction. He had a drain coming out of his brain, 3 IV’s, a pic line, heart rate monitor, blood pressure cuff and the oxygen mask next to him blowing air on his face. His little eyes were closed and I walked up to him, grabbed his little fingers and said “Hi, Bubbie!” He opened his eyes and looked straight at me. 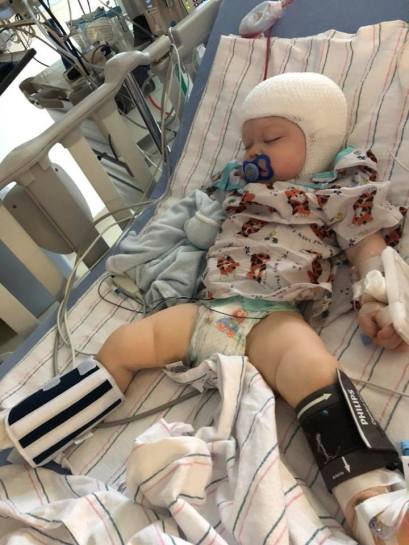 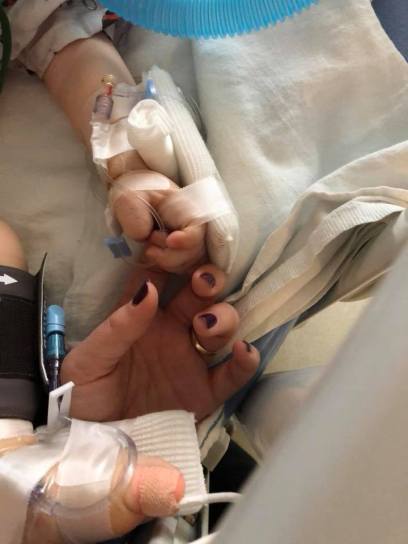 It was all over. We were on the other side. Oh the relief, I can’t even begin to explain.

I asked the nurse if I could hold him. She said eventually I could hold him but just to wait a little for him to rest as he was still coming out of sedation. The neurosurgeon came in and I was standing next to the bed with him. All the sudden Ezra stood straight up and literally LEAPED across the bed into my arms. I was terrified to hold him, I didn’t want to break him but he gave me the best squeeze I’ve ever received. The neurosurgeon’s response was “well that’s a good sign” and for the next 24 hours either myself or Josh sat in a chair next to his crib and held him. 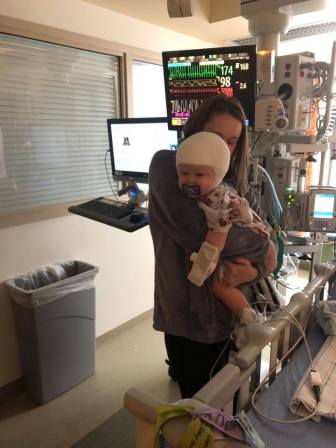 The rest of our stay at Boston Children’s was a series of us witnessing miracle after miracle of the Lord healing Ezra right before our eyes. The next morning after surgery Ezra was playing in the play room, jumping up and down, smiling and completely unaffected by the fact that he just had major skull surgery.

There is no explanation for how beautifully Ezra’s recovery was other then the fact that hundreds of people across the country were praying for him. Those prayers were felt and answered. Thank you for joining us on this journey with our son. Thank you for praying and believing for us when we couldn’t believe for ourselves. Thank you for the support, texts, calls and all the love! I believe with all of my heart that our son beat all the complications and all the expectations because of the Lord’s healing hand that week. You may not be a believer in miracles, but I’m here to tell you, they do happen.

Ezra never once screamed out in pain.

Ezra never once vomited from the medicine.

Ezra slept through the night the entire time.

Ezra was released from the hospital 2 days early.

Ezra’s received 50% less blood then the average blood transfusion for this surgery.

Ezra’s anesthesiologist said he did better under anesthesia then any other child he’d ever seen in his 15 years doing this surgery with these doctors.

Ezra’s eyes only were swollen shut for a few hours.

Our story is not the same as most who go through this surgery and for that I am thankful. 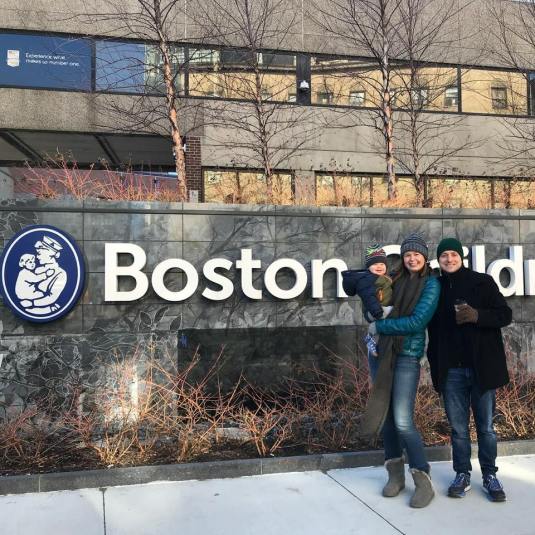